What is a Ringer?

When a case is decapped (and often resized), the primer cup and anvil are fully removed from the case, and it is ready to accept another primer. However, sometimes just the cap of the primer is removed, or just left hanging, with the rim left in the case. Many times the reloader will notice this during the decapping process or the press may even jam if the cup is left hanging and the progressive press won’t turn. In a single stage press, the user may not be able to easily remove the case from the case holder.

However, in a worse case scenario, a progressive press may turn to the priming station and attempt to insert a primer. The primer won’t seat since the rim is still in the case, and if the user attempts to force it, the primer may detonate.

So, what are you going to do about it? Recent Facebook posts recommend discarding the case, however, these cases are salvageable. If it is a 9mm or 45 ACP range brass case, it may not be worth the trouble, but if it is a 45-100 or 500 S&W Mag case, it may be worth trying to keep.

We have found one easy solution is to use a primer pocket reamer to remove the top edge of the left-over rim. Then use a small screwdriver tip, nail or knife to pop the rim out of the case. Below is the before and after pictures of a 45 brass case that had this issue. 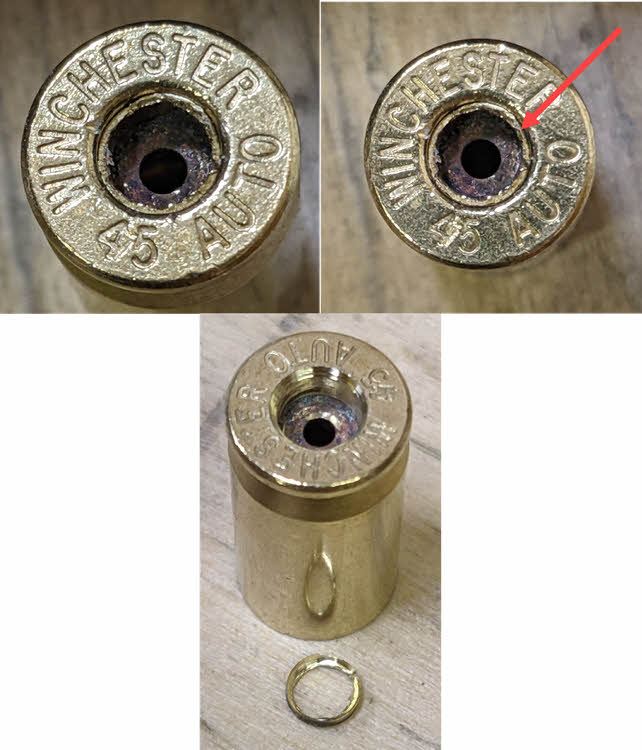